2 reviews
$17.95
| /
Edward Gorey (American, 1925–2000) Seventeen Cats on the Front Steps of 82 Maple Street No two cats stand, sit, stretch, or snooze quite the same way. A dignified calico tucks her paws neatly under her, while an adolescent tabby lolls like a possum, with feet in the air. The relaxed residents of 82 Maple Street evidence the lifelong love and attention Edward Gorey afforded his feline friends. Meet them all in this 300-piece jigsaw puzzle.
• Gather with family and friends for puzzle-piecing together!
• Our luxury puzzles are crafted with attention to every detail
• High-quality 250-GSM matte art paper for superior color, crisp details, and no glare
• Ribbon-cut thick board for snug fit and minimal dust
• Produced using thick recycled paper board
• Exclusive selection of art from museums and artists around the world

Artist and author Edward Gorey (American, 1925–2000) is beloved for the boundless imagination and sharp humor exhibited in his more than 100 published works. Gorey was also a set and costume designer for innumerable theater productions, including a staging of Bram Stoker’s Dracula, for which he won a Tony. He had a profound affection for literature, film, ballet, and animals. Cats and other odd creatures appear in many of his crosshatched illustrations. His humorously unsettling drawings of vaguely Victorian innocents facing unfortunate ends became familiar to a wide audience after appearing in the opening credits of the PBS television series Mystery! Gorey’s Cape Cod home, a veritable cabinet of curiosities, is now a museum celebrating his life and work.
Reviews

Seventeen Cats ... is a wonderful easy puzzle.
I always love the Gorey pictures. 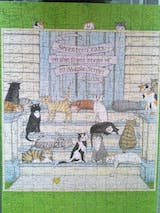